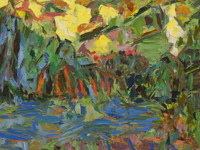 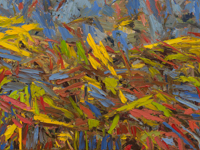 In 2013, Bettina was artist in residence at Brantwood, John Ruskin's home in the Lake District.

Her residency paintings were shown in a solo exhibition at Brantwood from September 2014 to January 2015. Click here to see a selection of the paintings in the Blue Gallery and here for a group of paintings interspersed in the original setting of Ruskin’s Study.

The residency and exhibition were kindly supported by the Ruskin Foundation and the Brantwood Trust.

A book about Bettina's residency is available. It features a foreword to her work by Howard Hull, the Director of the Ruskin Foundation and the Brantwood Trust, an interview between Gareth May and Bettina, and the complete set of residency paintings in chronological order.

Foreword from the Residency Book:

“It is a rarity today to find an artist to whom paint is such a complete language as it is to Bettina Reiber. There are, of course, plenty of artists for whom the textures and tactile dynamics of paint are their main interest, but they generally rely for success on some rather obvious visual or conceptual armature to support the whole. To shape the interplay of painterly marks into the deeper and more elusive language of perceived and meditated experience so that the material itself trembles with the vitality of place or person is an altogether greater undertaking.

A residency at Brantwood abandons the artist on an enchanted isle. The landscape is full of obvious picturesque seductions, but beneath the surface tougher, stranger – one might say more exotic – voices can be heard. It invites the artist to dig deeply into their own resources while also opening up to new challenges. In such a setting John Ruskin’s advocacy of the importance of seeing in its most universal and holistic sense is compelling and it exactly describes the approach that Bettina adopted in her work here. Everything about Bettina’s modus operandi was designed to concentrate the transformation of paint into the expression of an intense experience. This is risky work, work which often walks close to the edge of failure and is demanding of considerable humility. Choosing to work outside, the artist has to work quickly and decisively, translating perception into a rapid accumulation of gestures, themselves articulate and expressive. Success comes down to the directness with which she imbues paint with the life of her eye. Bettina’s eye is more than a physical eye: yes, it is optical; it is also poetic; most importantly it is spiritual, marrying the inner and outer being of artist and subject in a single vision.”

The residency originated after Bettina’s landscape paintings had being selected  in 2012 for inclusion in the Ruskin Art Prize Exhibition at Brantwood “A New Look at Nature”.

Bettina stayed and worked at Brantwood for three periods, in April, June and September 2013.

This offered her a wonderful opportunity to become increasingly familiar with certain spots on the Brantwood Estate, just above it at Crag Head, and also in the foothills of the Old Man of Coniston. Bettina was drawn to the vast views across Lake Coniston and into the Cumbrian Mountains and to the much shorter views within the lush rainforest on the Estate itself. By being in the landscape she could fully experience the impact the different seasons have on the feel and look of landscape. “I love the grandeur of the landscape and the variety of feeling tones that it elicits.”

Bettina paints in oils and only in front of the motif. She takes her easel, paints, and brushes, and – in the Lake District especially critical – rain and wind gear into the landscape and walks until she finds a spot that triggers her inspiration and her imagination.

Bettina says of her work: “I seek to identify in paint an image that resonates with and reflects the initial shudder, exploring through colour and mark making and a subtle interplay of two dimensionality and the illusion of three dimensionality, my experience in the landscape. The picture is about the here and now, about my being in this world here in this moment. The temperature, the biting wind, the musty smell of wet leaves and the first buzzing of the bumble bee, all might find their way into the work, without me having a programmatic approach. There is always the question: Will the picture come off? Will it be possible for this white board to come to life, will I manage to allow it to reflect this particular energy on this day? Because ultimately this is what my work is about: The intensity of life, the celebration of the beauty and excitement of nature that can overcome one like lightning: To capture that, even if only in a small way, through paint.”